Today we will be looking at perimeter. This means the measurement all the way around a shape. Have a look here to remind yourself

Then complete Monday's sheet from the files.

Continuing our work on perimeter today you will be looking at irregular shapes. You may need to add or take away to calculate the lengths that are missing.

Complete Tuesday's sheet from the files.

Today we move onto the area of the shape. This means how big the space inside a shape is. To work out the area of a shape we must multiply the width by the height. Have a look at this video to help explain what area means and in what ways it is different to the perimeter. https://www.bbc.co.uk/teach/class-clips-video/maths-ks2-understanding-area-and-perimeter/zb87t39

Complete Wednesday's sheet from the files.

Today we will be using our arithmetic skills to solve work problems. This means you may need to add, takeaway times or divide to find the right answer. You can use any method you think is appropriate for the question.

In today's lesson we will be looking at how the Vikings travelled around. As Scandinavia was such a mountainous area, the Vikings had to move from place to place using boats. The longboats were very unique in their design and this allowed the Vikings to become very successful seafarers and adventurous explorers. Watch this video to discover what made their boats so special and how they were able to conquer new lands undetected:

Once you have done that look at the picture of the longboat below, which has been labelled with all its different parts. Using expanded noun phrases we would like you to add some more detail to the parts and write out some exciting sentences about the Vikings and their longboats. To remind yourself of how to write an expanded noun phrase watch this video: https://www.bbc.co.uk/bitesize/articles/zmqh2v4 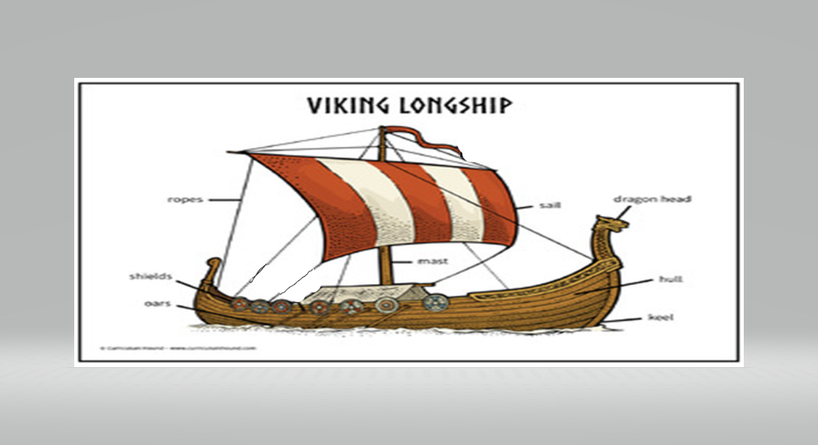 As well as their longboats, Vikings had a selection of weapons which made them the most feared warriors of their time. A warrior's weapons were very precious to them and would often be passed down from generation to generation or buried with them when they died. Carry out some research of your own and find out what types of weapons the Vikings used, what they were used for and why. Here is a link to help you on your way:

After you have done that we will be looking at how to use apostrophes for singular and plural possession so that we can allocate the right belongings to the right person or thing, depending on if they are an individual or group. Watch this video to remind you of regular and irregular nouns and how we use apostrophes according to this:

Last week, we learnt that Vikings were Pagans, meaning they believed in many Gods. Today, we would like you to find out as much as you can about these Gods. Who were they and what was so special about them? Thor is a very well known Viking God and has even had some movies made about him. Find out what his favourite weapon was, his strengths and how he was related to other famous Viking Gods. Once you have gathered lots of information about your 3 favourite Gods, create a fact file for each, using basic headings, and then share it us with by saving it to your file on BGFL. Remember to draw a detailed picture of your chosen Gods too and label them clearly. Watch these great videos about some of the Viking Gods told through sagas (stories) https://www.bbc.co.uk/programmes/articles/20stJyBvh9mv7kpSVgDfKPw/viking-sagas-age-7-11

In Geography this week, we will be using maps to locate cities and towns in the United Kingdom that were invaded by the Vikings during the 8th century. The Vikings later settled in these places permanently and the names that are given to them derive (come) from the Viking language. Look at the document below which shows the endings that many of our towns and cities have, and then see if you can find any of them on a map of Britain.

This week in RE we will be looking at incarnation. Incarnation is the Christian belief that God became human in the form Jesus. It is an essential part of the Trinity and in many ways forms the basis of Christian belief. Watch this video to find out more: https://www.bbc.co.uk/bitesize/guides/zxnpjty/revision/1

This week, we would like you to go back and revise all of the statutory spellings you have been given so far this year. When we come back after the Christmas break we will be testing you on some of those. You can find the year 3 and 4 spellings list on this link to remind yourself or look in your reading records as they are also in there.

Our focus this week in NNS are words ending with the letters 'ture'. Think of as many word as you know that end with those letters and say them out allowed. What do you notice? They have a ch sound as the t is not stressed. See how many of the words that you thought of you can spell and then look them up to see if you were right.